We're not all gourmet chefs, but when cooking, we can use simple ways to flavour and season our cooking, and sesame oil is a great way to do this and can introduce earthy and nutty flavours to salad dressings, noodles, fried rice, marinades.

It can also work wonders with spicy foods and chicken dishes, but what sesame oil will benefit your cooking experience?

With so many options and varieties of this oil, it's not always clear which one will compliment your cooking the best.

Not to worry, as we have picked out some of the best sesame oils that will complement a variety of meals and cooking styles, you'll know which ones are for you. If you want to enrich your cooking, read on to find out more.

We're starting off with an oil that has a unique blend of sesame and soybean oil that is an excellent addition to any stir-fry that delivers an exceptional nutty sesame aroma to your cooking and is more potent than your traditional cooking oils.

You can use it as a replacement for conventional cooking oils and is best used in a pan or wok and can be added at the end of your cooking process to enhance the flavour of your cooking further.

If you're looking for the optimal Chinese cooking experience, you can't get any better than this variety.

You have an oil that is only made from the finest selected sesame seeds with a rich flavour and a nutty aroma that comes with the toasted sesame oil that you expect.

This oil has a dark, caramel type of consistency that is a staple in Asian cuisines that is usually added to dishes at the end of the cooking process and can be used for cold dishes or marinades and sauces.

If you want an oil that can be used in many ways and complement your cooking, you'll definitely want to check this one out.

Here we have a cold-pressed roasted flavoured oil that can be used in stir-fries and sautéed dishes as well as in marinades, vinaigrettes, sauces, and oriental noodles salads or fried noodle dishes.

To heighten the flavour, even more, you can add soy sauce or garlic and ginger for an optimal Chinese or Japanese cooking experience that everyone will love.

Made with 100% toasted sesame oil, you have the balance of flavour and consistency that many of these oils are judged upon, so it is difficult to ignore.

Here is an oil that stands out from other oils like this one as it's easily digestible and is valued for its healthy balance of fatty acids, which can help to prevent heart disease, and strokes.

You have that classic nutty aroma and give your cooking that authentic oriental taste to food and is used in marinades, vinaigrettes, sauces and dressings.

This could be a good option for you if you're looking for something that will give your sauces that bit extra that definitely won't go unnoticed by your dinner guests or the family.

This cold-pressed, unrefined and unprocessed oil is known for being a healthy cooking medium while preserving all the natural antioxidants and nutrients.

This oil brings a full-bodied flavour to your sautées and fried goods, just to mention a few possibilities of this oil that can also be a great finisher to your cooking.

You could go one step further and use it in your skincare routine to promote skin and hair health, just in case the uses of this oil seemed limited to some.

You have a 100% pure toasted sesame oil spray with the typical aroma of toasted seeds and a flavour most commonly attributed to Asian cuisine.

It is naturally rich in unsaturated fatty acids, Omega-6 and Omega-9, and can be expanded into uses within Mediterranean cuisine. It can be the finishing touch to sweet recipes and even casseroles if you want some inspiration.

We know that pairing a dish with a type of cooking oil can be something of a contentious point when looking at how to make dishes more flavourful, as some people might prefer richer and more intense flavours than others.

There are some factors that could affect your dish for the better or worse, so we've provided some below, and may even make your choice easier for the next time you go shopping. 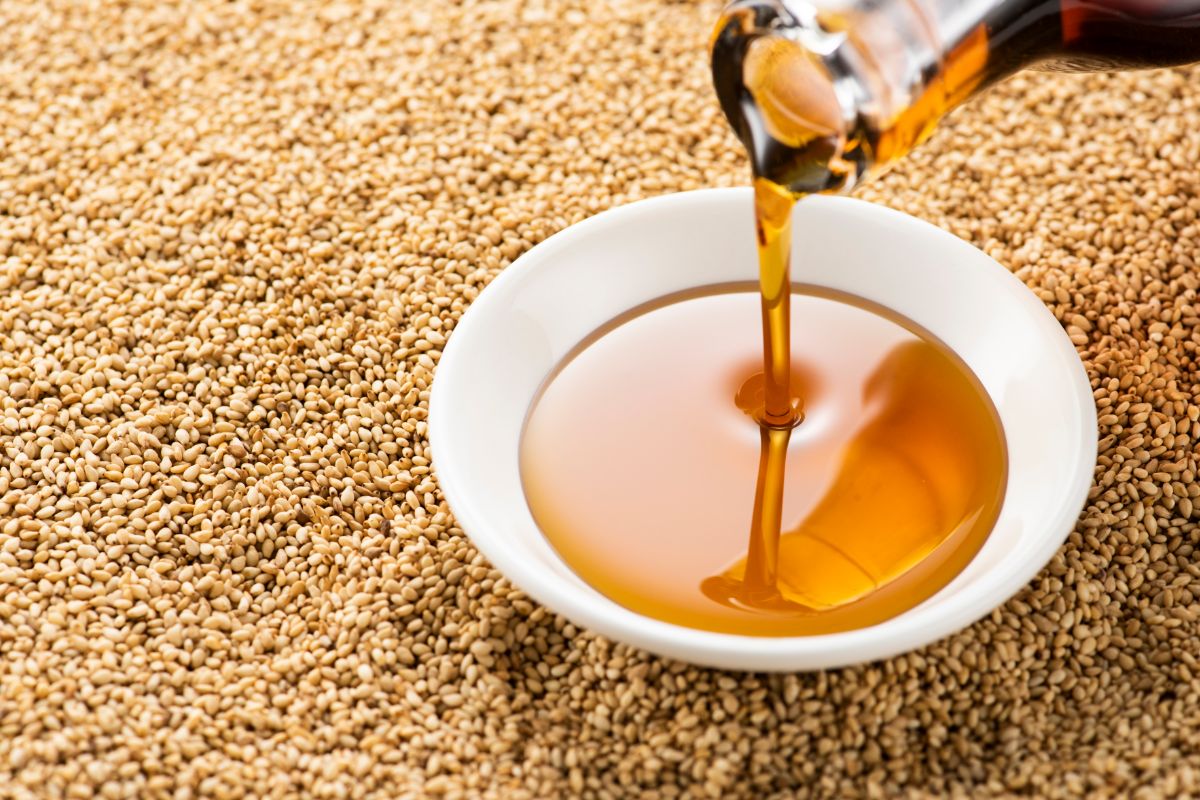 Knowing that different oils have different smoking points, a regular non-toasted variety of oil can be used in higher temperatures of 210° celsius and can be added to less stable oils to improve the flavour of deep-fried foods.

On the other hand, extra-virgin oil has a lower smoking point alongside regular olive oil you're only going to be able to use it in temperatures around 165-190° celsius, so you should consider what cooking method you're going for so you don't end up with a thinner consistency or loses its properties under intense heat.

You also don't want it to burn or smoke, which could be a hazard in the kitchen and spoil your meals, so you should also consider the safety aspect of using some oils.

The type of oil you use will affect the flavour of your meals for the better or worse, depending on how you use them, so you want to decide if you're looking for a rich nutty taste to compliment your meal.

Be aware that in some oils, such as walnut oil, the taste can become quite bitter, so it might benefit from being used for sauces or salad dressings or any recipe that doesn't require cooking.

Then you have varieties such as light olive oil that has a lighter and more neutral flavour to dishes like Mediterranean cuisine where there is an abundance of flavour already in the recipe itself, so make sure to check the label for details about the flavour.

If you're conscious about your health, in general, sunflower oil contains unsaturated fats that can affect chronic inflammatory conditions, heart health, obesity, and cancer if you are exposed to too much of this type of oil.

However, some varieties contain omega-6 fatty acids that are essential in our diet because the body can't make them and can be used to maintain normal blood cholesterol levels for immune response and growth and development.

A good option would be to go for lighter versions of your favourite oils or use less in your recipe if it allows for it, as you don't want to compromise the taste or consistency of your meals.

Should I use Toasted Or Regular Sesame Oil?

It really depends on what you're planning to use them on, as, on the one hand, you have regular sesame oil that is great for cooking and stir-frying.

Then you have toasted sesame oil that works best as a finishing oil for already cooked foods or serves as an ingredient in a homemade vinaigrette.

As both of these oils serves to elevate the flavour of dishes, you might want to include both in your cooking arsenal. In brief, if you want a more intense flavour, go for toasted sesame oil.

You might have heard of a variety known as cold-pressed sesame oil, which can give a rich flavour to your food, but you shouldn't use them in a huge quantity or used with a lot of heat.

That is why it's trickier to cook with this oil and instead should be used on top of salads, breads, and cooked meats.

If you're someone who isn't experienced at cooking with these types of oils, you might want to stick to regular sesame oil as it can withstand high heat for frying and roasting and still gives you that flavour.

What If I Am Allergic To Sesame Seeds Or Nuts?

In general, you should avoid sesame oil, and if you have a nut allergy, there are certain proteins that resemble those that are found in certain nuts, so make sure you're checking the allergen advice on the label.

You can substitute it for peanut oil, but if you have allergies to peanuts, you could try avocado or olive oil, and in lighter forms can be beneficial to your health as well.

Are There Any Alternatives To Sesame Oil?

You can find vegetable oil, walnut oil, peanut oil, perilla oil, and many other variations that offer the benefits of omega-3 fatty acids and vitamin 3, and some can help prevent inflammation and support heart health.

The healthiest and universally used oils include extra-virgin olive oil, which is the least processed of the other oils and has a flavourful and fruity aroma, so you don't need to compromise in this area.

You should also be aware that oils such as sunflower oil should be avoided by people with diabetes as it has the possibility of spiking sugar levels, so doing your own research can help in this regard.

Can I Make My Own Cooking oil?

Yes, you can, and one of these ways is to purchase an oil press that is usually hand-cranked and heated with a small kerosene or alcohol lamp.

If you're looking for larger batches of oil, you'll need an automatic oil press which is going to set you back between £200 and £3,000, then you will need to select nuts or seeds with high oil content.

However, you don't need a press if you're making avocado or coconut oil, you have to extract the insides and boil until the pulp is separated from the mixture, and if you don't have an airtight container, you will have to use it within 2-3 days.

Of course, this might seem like a lot of effort for a workaround, as some people won't need a mini oil production facility in their kitchens.

For this, you might be better off borrowing one from someone, as the only real upside is that your know exactly what's inside your oil and doesn't contain any preservatives.

But there's no guarantee that you will get a satisfactory batch each time you use it, so you may want to consider your options.

So while we have a good selection here for you to try out, you might be thinking about whether there's a right or wrong way to use cooking oil, as experts and chefs everywhere will use different kinds of oil in different amounts.

This isn't to put you off using them but acts more as a recommendation as those richer and more intense flavoured oils aren't going to work with particular dishes or higher temperatures.

After all, you don't want to take the taste away from the individual components of a dish, like a salad, for instance, that you worked hard to prepare and include in your dish.

If you find that your oil doesn't get the result that you're looking for, don't fret. Next time you could introduce an alternative or use a lighter version as part of a marinade that is locked into the food and doesn't overpower the taste at the same time. Thank you for reading.

Jeff Pratt
Hi, I’m Jeff Pratt and I am a self-certified food lover. I come from a line of food lovers, and all my friends bear the same title. What else is there in life to enjoy as much as food?

My love of food extends challenges into cooking, trying new restaurants, and much more. That is why I’ve created The Gannet, as a place to teach people all my tips and tricks surrounding food and cooking. Don’t forget the food challenges!

So, stay a while and learn from someone that has been interested in food their whole life. Who knows, maybe I’ll meet you on a wall of fame somewhere.